It has been a long time since annual living absorption were positive: 4Q07. For most assisted living metro area, the second quarter of 2009 was actually the first time that there was an annual increase for absorption since the end of 2007. 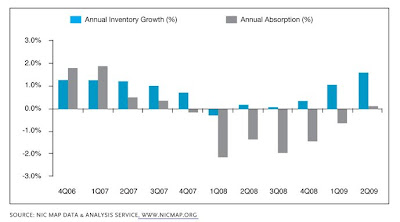 NIC MAP is the leading provider of data concerning occupancy levels of the assisted living market. They survey the top 31 metro markets in the US on a quarterly basis.
as of the second quarter of 2009, there were 150,919 occupied rooms within the sample coverage area, compared to 150,798 in the second quarter of 2008.
In the past twelve months, 16 of the 31 metro markets have seen an increase in their occupancy level. The big winners of such trend have been California, Chicago and Riverside, Las Vegas being the biggest loser.

NIC MAP has released 3Q09 reports and data for independent living, assisted living, and nursing care properties in the 100 largest metro markets. Subscribers can access the reports and data included within their subscription by logging into NIC MAP. Reports can also be purchased on an ad-hoc basis for any of the 100 largest metros or Inventory and Construction Reports for any of the largest 31 metros by visiting the NIC Store