Up and away with Ageism!

Up and away with Ageism! 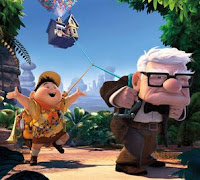 UP is the new Pixar movie that was released last week. It is the story of a 78 year old man who ties thousands of balloons to his house and flies away to the wilds of South America with a kid who is 70 years younger.
When it was first announced, the industry was scared because people thought the theme lacked connection with the target population.

But people actually do connect. And the film achieves much more than that:

The movie tells the story of an old man’s quest to fulfill a lifelong promise to his late wife Ellie, while he still can; it’s also about getting old and finding oneself again after a loss. When Carl, the hero, is forced to move to a retirement home, he decides to escape to the destination of his wife’s and his old dream. He wants to avoid physically confinement of old age represented by the Shady Oaks retirement community. He inadvertently embarks Russel, a kid that comes from a broken home and is looking for a father figure on the journey.

These are the premises for an exceptional showcase of strong role models of multi-generational friendship: Carl and Russell become friends and teach each other about responsibility, caring for nature, and the movie’s main theme: “the spirit of adventure.”
As the friendship between characters grows and the adventure goes on, Carl’s appearance changes: at the beginning, he is a slow-moving, slow-rising old guy. For most of the movie he dodders with a cane. In the third act, though, he’s a superman. He can climb the upside down ladder on the zeppelin, carry heavy objects, yank a fat boy out of the air. He even gives away his cane and his clothing change appearance for a more “younger” style. A way of showing that old age can be defeated by finding oneself again.

The evolution of the characters and the action successfully shows how age and ageism are concepts that can evolve, it shows the importance of seizing the present rather than dwelling on the past and that by doing so, anyone can defeat his age and his fear of becoming old. The epilogue of the movie actually shows Carl enjoying a great second life along with Russel, without his cane!